Do headphones or earplugs help with airplane pressure?

An ear forms an essential part of the body that has critical functions, among them hearing and balancing the body. Therefore, the safety of our ears, especially from noise pollution during a plane flight is paramount.

It is possible to experience some discomfort in the ear when plane pressure changes. However, there are some measures you can take to at least reduce the impact of the pressure.

When flying, wearing over-ear headphones helps reduce the impact of airplane pressure on your ears, but only when coupled with other remedies like doing a little chewing. However, using headphones will only reduce the noise and its impact on the ears, but will not help with the popping effect.

How Earplugs help with airplane pressure

During a flight, the air pressure changes causing the traveler to experience ear discomfort in one or both ears. Such a sensation can be painful although in most cases does not last for long.

Beyond that, it can cause long-term complications like hearing loss, permanent damage to the inner ear tissues and chronic pain.

The airplane earplugs or wearing headphones helps in reducing airplane pressure by regulating the ear pressure. This tends to lower the pain resulting from pressure changes. The earplugs consist of two elements: 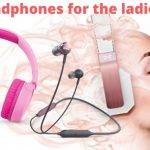 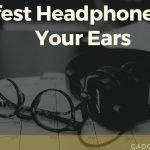 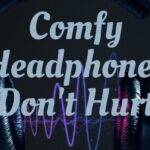 7 Most Comfortable Headphones that Don’t Hurt: A 2022 Review

How do earplugs help when flying

During the flight, cabin pressure changes, the ceramic piece helps to regulate the pressure reducing any ear discomfort. The airplane’s earplugs act to suppress noise, enabling the user to sleep and relax throughout the air travel. Purpose to insert earplugs in your ears an hour before the flight.

However, the immediate drastic action to take for you to protect your ear is to yawn and swallow during the ascent and descent. Or even better, purchase the earplugs before the flight. While you are using the headsets, be careful to use headphones safely and adopt safe habits when listening.

Why the cups over ears when flying?

The sensation in your ears during this moment of pressure changes may be painful. The subsequent effects may be long-term complications like hearing loss and permanent ear damage. The burning question for that matter is whether headphones help with airplane pressure.

Clinical research by PMC U.S National Library of Medicine National Institutes of Health in 2015 indicted that the following:

What causes of ear pressure while flying?

The issue of feeling a sense of discomfort while flying in an aircraft is both common among children and adults. Don’t be surprised when your ears set you in temporary deafness. Sounds familiar?

The primary cause is usually the difference in pressure between the specific air that is in the middle and external parts of the ear. The outer and middle ear remains separated by the eardrum.

The middle ear air is always at ground atmospheric pressure which is the pressure that is available in the aircraft before takeoff. When the plane starts climbing after take-off, the air pressure in the cabin will start changing.

What does that mean? The air in the middle ear will be on a varying level with the air around the outer ear.

The reason why you will feel the pain is because there will be a difference in pressure across the eardrum. To balance this condition, the pilot pumps air into the cabin to approximate a pressure equivalent to 8000ft above sea level.

How airplane pressure can lead to ear barotrauma

The airplane can bring a condition to your ears known as ear barotrauma and it responds to self-care. The barotrauma which is also known as the airplane ear happens when the aircraft takes off or when landing.

The pressure changes in the surrounding triggers some discomfort in the ear and eventually leading to pain. Interestingly, there are certain causes like blockages and infections which result in barotrauma.

7 Most Comfortable Headphones that Don’t Hurt: A 2022 Review

How to Reduce Ear Pressure when Flying

Apart from the use of headphones or earplugs to help reduce ear pressure, you can adopt other measures as you travel. So, whether headphones help with airplane pressure or not, it is good to combine them with other remedies. The following remedies can help tackle ear pressure during an air journey.

During an exercise of swallowing, an air bubble will produce a unique pop sound through a Eustachian tube that works to replenish the air in the central ear. Consequently, the air gets through the membrane of the inner ear by absorption and repeats the cycle.

The purpose of the cycle is to regulate the air pressure which is on both sides to be at equilibrium.  As you fly, the Eustachian tube opens more frequently to allow the changes in the air pressure.

The Valsalva Maneuver is a technique that changes the breathing pattern by systematically holding and releasing it. While you can use it well, you need to know the benefits and steps involved. The following steps will help you perform a Valsalva maneuver: